News from the Center: Edition 3

In Search of the American Center: I am not usually fond of the “this one chart explains everything” genre of political analysis, but every rule has exceptions, and I’m going to make one for a chart that accompanies a new survey on the 2016 election. It helps explain why Donald Trump won the presidency and why his administration is such a policy train wreck, why Democrats keep losing even though the country seems to be getting more liberal, and why populist surges are likely to be with us for a while – a trifecta of rather important explanations.

The survey was conducted by the Democracy Fund Voter Study Group, with an accompanying report written by Lee Drutman, and it assesses voter sentiment along two axes: On the horizontal, economic issues, including welfare, entitlements, trade and inequality; on the vertical, moral/identity issues, from abortion and transgender rights to views of race, gender, immigration and Islam. [The New York Times, 6/21/17]

Political Divisions in 2016 and Beyond, tensions between and within the two parties: It is a truism of modern American politics that the United States is a deeply divided nation. By almost all measures, the two parties are further apart from each other, both at the elite level, and in the electorate, than in the past. There are more and more politically lopsided counties, and only a small percentage of states and congressional districts swing from one party to another. Partisan unity scores in Congress are very high.

Yet, while the parties are far apart from each other, there are also tensions within them-tensions that were clearly on display in the 2016 primaries. In both parties, primaries revealed rifts, though Democrats were generally more cohesive than Republicans. As it appeared that Hillary Clinton would win the election, it became fashionable for political observers to write about the coming Republican civil war. [Democracy Fund Voter Study Group, 6/17]

What Moderate Lawmakers Like us Hope to do in the Next 100 Days: On this 100th day of the Trump administration, partisan prisms will predictably provide audiences with radically different images: One side will paint a picture of a strong and decisive administration “Making America Great Again,” another of a flip-flopping and divisive group of neophytes who aren’t up to the job.

As centrist leaders in the House of Representatives leading the New Democrat Coalition and Tuesday Group caucus, and legislators dedicated to the core principles of governing, we’d rather propose a forward-looking vision for the next 100 days. Let’s stop looking in the rearview mirror and focus ahead on the ideas we can all agree would be good for the United States. [The Washington Post, 4/29/17]

A Bipartisan Twenty-First Century New Deal: The challenge of how to help those left behind by rapid economic change-whether caused by technology or global competition-has moved to the center of the U.S. national debate in a way it has not been since the 1930s. Trade competition, especially from China, was a significant factor in the disappearance of nearly six million U.S. manufacturing jobs in the 2000s, and President Trump’s criticisms of U.S. trade policy helped him to victory in November in the Rust Belt states of Michigan, Pennsylvania, Ohio, and Wisconsin.

Despite the White House focus on the issue, however, trade is only a small part of the disruption. Retail industry employment is rapidly shrinking in competition with Amazon and other online retailers, self-checkout machines continue to replace cashiers, and autonomous vehicles will soon come to replace truck and taxi drivers. Technology will leave few segments of the labor market untouched: new computer programs are already replacing some forms of entry-level legal work and investment planning, while machines with rudimentary artificial intelligence capabilities are already writing basic news stories  [Council on Foreign Relations, 5/31/17]

Young men falling to the bottom of the income ladder: The share of young men making between $30,000 and $100,000 a year shrank significantly over the past four decades, despite the fact that they are better educated and working full time at the same rate. Many of them have fallen to the bottom of the income scale, according to a new analysis by the US Census Bureau, and this shift is having a major impact on the rest of their lives [Boston Globe, 5/22/17] 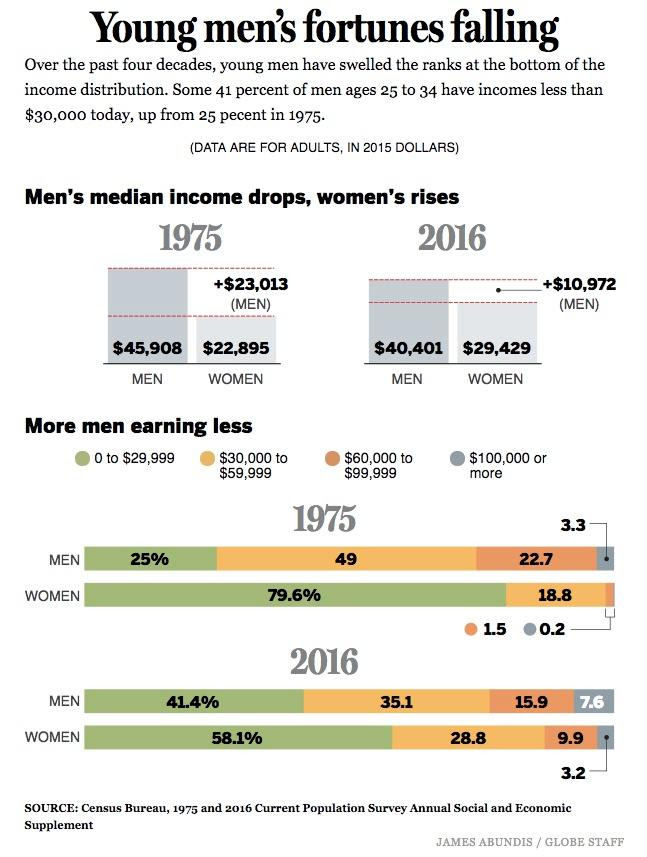 Research: Political Polarization Is Changing How Americans Work and Shop: Our results highlight another point about partisanship in contemporary society: It has become an important social identity. It extends beyond particular policy beliefs or support for specific politicians. Our findings show that people evaluate the exact same transaction differently based on whether the other party is a Democrat or a Republican, even though their partisanship ostensibly provides no information about their quality as an employer or seller. [Harvard Business Review, 5/19/17]

Trump’s Budget at Odds with Public’s Priorities: An innovative survey from the University of Maryland’s Program for Public Consultation (PPC) reveals significant differences between the budget proposed in the Trump administration’s “Budget Blueprint” for 2018 and what the public recommends. The findings were released today by Voice Of the People.

For the top ten areas, the gaps between the spending proposals of the majority of the public and those of the Trump administration total $139.6 billion. For Republicans these gaps are narrower totaling $86.9 billion, while for Democrats the total is $188.5 billion. [Program for Public Consultation, 5/23/17]